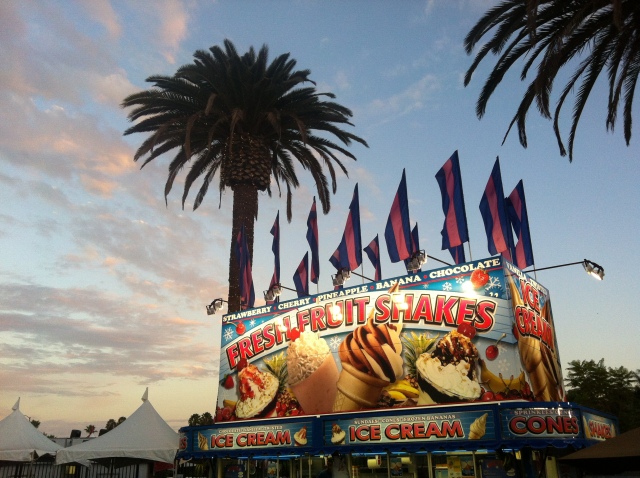 So many exclamation points! So much excitement!! Bucketsfull of unbridled enthusiasm!!! I wasn’t jazzed about typical fair fluff like fried stuff on a stick or pony rides or midway mayhem – I was losing my mind over bunnies.

All for good reason: I plucked the Rabbit Raiser badge out of the trusty hat this month, and going to the Fair seemed the logical first step, not just because it was actually one of the badge requirements, but also because I figured that where there are bunnies, there are people who can tell you stuff about bunnies.

And so we found ourselves driving out to Pomona, the car buzzing with a current of superdork electricity. Once inside the fairgrounds, we carefully studied the schedule, circled possible must-sees (Pig Races! Max’s Country Farm Show! Chainsaw Carving Demonstrations!), and made a beeline for the Big Red Barn.

Inside, we gawked at all manner of fuzzy wuzzies – baby-soft goats, milk-bloated cows, suckling pigs, delightfully plush unsheared sheep – but I was jonesing to locate the bunnies, cradle one in my arms, and learn about all sorts of rabbitish things from some handsome overall-clad farmhand.

Instead, this is what I got: 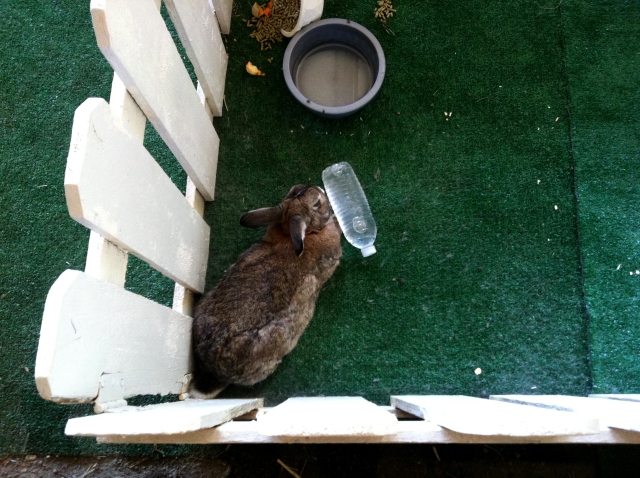 One lousy rabbit cuddling with a water bottle.
Hmpf.

There was a half-hearted sign drooping off of the enclosure, so Brooke propped it up and I scrolled through, hoping to salvage some measure of enthusiasm and go home with at least a minor amount of rabbity knowledge tucked in my back pocket. From this neglected paper, I learned four things:

1. Rabbits, much like myself, become lethargic in the heat.
2. Ninety percent of a typical rabbit diet comes from grasses, which is also how they get most of their water intake.
3. Desert rabbits can run up to twenty miles per hour in a zig-zag pattern if they’re freaked out.
4. Rabbits are coprophagic.

What’s that, you say? What does “coprophagic” mean?
Oh, I’ll tell you.

It means they eat their own poop*.
No, really.

I looked down at the lonely rabbit and for a split-second, imagined it eating its own poop, then walked over to the Information desk in a cloud of vague disgust. “Hello,” I said to the ambivalent gum-chewing cowboy slumped behind the counter. “Are there any programs today about rabbits? Or any times when I might be able to hold one?”

I exaggerated my disappointment in hopes of cajoling Tex McLazypants into letting me at least pet the rabbit.

“Oh, man…what a bummmmer. I came all the way to the fair today to learn about rabbits.”

“Sorry, m’am. Come back later, and there’ll be a taller guy with a cowboy hat behind the desk then who might be able to tell you some things about rabbits.”

“Oh, okay.” I started to walk away, then thought of one more question. “Are there any more rabbits – or is that the only one?”

Slightly more helpful, Tex pointed the way to an area just beyond the barn that he promised held “hundreds” of rabbits. HUNDREDS!

Turns out Tex isn’t so good at math; there were probably only about thirty rabbits…but oh, what delightful little furballs they were! There were white ones and gray ones and brown ones and speckled ones and one that looked just like my cat. There were ears sticking straight up and ears flopped down to the side. Some bunnies were curled up like furry Thanksgiving turkeys, but others were sprawled out, bellies flat on the ground, legs straight behind them, like they were sunbathing. 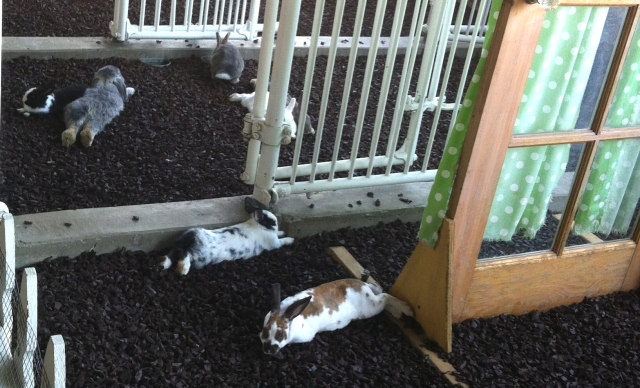 I snapped some photos and cooed at every bunny in my line of vision. Then I turned to Brooke:

Then I remembered that they eat their own poop, and was sort of grossed out again, so off we went to visit the bees…who create honey by basically vomiting. Aren’t you guys glad we’re learning about all this stuff?

* Ok, here’s the scientific explanation of why rabbits eat their own poop: According to my friend Kathy’s friend Cynthia, who’s been raising rabbits since the dawn of time, little Peter Cottontail eats his poop daily. Well, it’s not quite “poop,” as you and I know it, but rather something called a “cecotrope.” Apparently, that 90% grass diet isn’t doing these guys any digestive favors, so they have a peculiar (and kind of scientifically incredible) way of handling difficult-to-digest food. There’s a sac at the joint of the large and small intestine called the cecum and this is a sort of extra-processing stop / bacteria party for foodstuffs (i.e. indigestible fiber) the rabbit is having a hard time squeezing nutrients out of. The organisms in the cecum go to town and break it down, so several hours after the rabbit eats, he excretes little nuggets of extra-digested food which usually stick to his furry little rump. The second these guys are ready for the harvesting, the bunny scoops them back up for re-absorption and bingo, Full Nutrient Intake Complete!

all photos by Shawnté Salabert