Even though I’ve since ventured into bee territory, I did have one last task completed for my Minstrel badge I wasn’t able to post yet.

This was my final requirement:

10. Plan with others an entertainment based upon the life and work of one great composer, and put it on in your troop meeting or at a campfire.

I chose to do a ‘mixed media’ video presentation on the life and times of Kanye West – filmed in my hotel room in Poland at 3am – complete with Spotify playlist and beautifully hand drawn slides in pencil by yours truly on the back of hotel stationary (examples below). 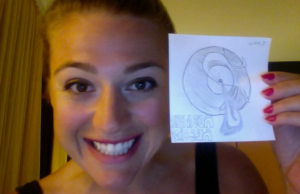 I thought about doing Beethoven, or Mozart, or basically anyone dead, but I desperately wanted to blow the dust off this educational, but old-timey badge. Plus, Kanye’s new album just came out, and for the first time, I’ve started warming up to him. I’m still not 100% sure how I feel, but I’m starting to appreciate his work, rather than letting his persona in the media override my opinion. I learned a lot in the research process, and heard more of his music than I previously had, and it ended up being pretty interesting. Love him or hate him, he’s a talented, unique individual.

Some excerpts are below (and yes this is a dorky suburban white girl version AND I can’t draw for sh** – no judging.): 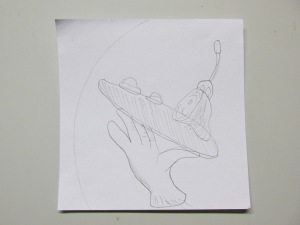 At age 13, Kanye wrote a rap song called “Green Eggs and Ham” and persuaded his mother to pay $25/hr for time in a recording studio, which was a small, crude basement studio where a microphone hung from the ceiling by a wire clothes hanger. He soon crossed paths with producer/DJ No I.D., otherwise known as “The Godfather of Chicago Hip Hop,” who quickly became his mentor and taught him how to sample and program beats. 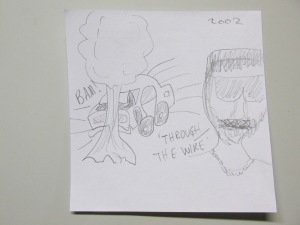 In 2002, while driving home from a California recording studio after working late (with Ludacris I believe), Kanye fell asleep at the wheel and was involved in a near-fatal car crash, which left him with a shattered jaw, which had to be wired shut in reconstructive surgery. The accident inspired him; two weeks after being admitted to hospital, he recorded a song with his jaw still wired shut. The composition, “Through The Wire” helped lay the foundation for his debut album, The College Dropout, which produced this jam we all know and love, and came out on Roc-A-Fella. 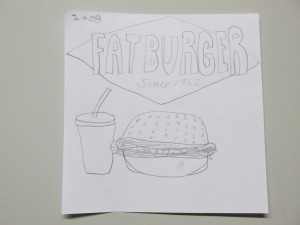 In August 2008, Kanye revealed plans to open 10 Fatburger restaurants in the Chicago area; the first was set to open in September 2008 in Orland Park. The second followed in January 2009, while a third location is yet to be revealed. 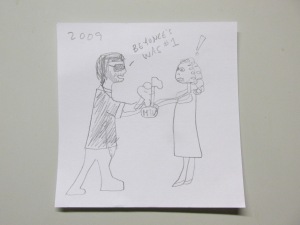 We all know this one. Having previously stormed out of other awards shows, Kanye’s controversial incident with Taylor Swift at the 2009 MTV Video Music Awards was arguably his biggest (I didn’t include the ‘George Bush doesn’t care about black people’ Hurricane Katrina incident in here, though it was in my original presentation), and led to widespread outrage throughout the music industry. Kanye said, “I’ma let you finish, but Beyoncé had one of the best videos of all time.” Kanye looks a bit like Barry Gibb in this photo – or one of the other Bee Gees. I can’t seem to draw him any other way. 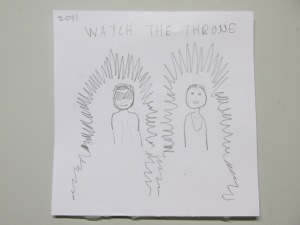 Following a boatload of hype, Kanye released the collaborative album, Watch the Throne, in 2011 with Jay-Z, who helped him get his start back in the day. By employing a sales strategy that released the album digitally weeks before its physical counterpart, Watch the Throne became one of the few major label albums in the Internet age to avoid a leak.

Fast forward to 2013, Yeezus has become Kanye’s fifth consecutive No. 1 album in the US, and he recently performed ‘Black Skinhead‘ on SNL. I dug it. As we also know, Kanye and longtime friend/girlfriend, Kim Kardashian now have a daughter, North “Nori” West, who was born on June 15, 2013.

So there you have it. For better or worse.